Only I would agree to go on a date with a guy that I’d only ever kissed before to Taboo, an annual Van City Sex Show.  Not my suggestion or pick for a date, but have to admit I was very curious as I’d never been.  And then theres the side of me who seems to be living the silly sitcom that just thought it was damn funny that a guy I’d only ever kissed had asked me to join him at the sex show.  Depending  on the guy, I might truth be known have found this to be creepy and have run in the opposite direction as fast I could, but this particular gentleman I feel incredibly safe with and he is in every sense of the word a true gentleman.

I know that some of you are thinking, “well, of course I’d go on a date to the sex show. I write Sexy In Van City and isn’t that what we’re all about?” I certainly had enough tweets asking me if I’d been and what it was like.  It had even been suggested that we film it.  Well in answer to that, that is not what we are all about. We are about ‘sexy’, not sex, not porn. We are about telling stories that are true to ourselves and many other women, but most are to afraid to tell, are embarrassed about or think only happens to them. Through these stories we hope to remind all women (and men) just what sexy devils they really are. That said I’m not a prude and I certainly do enjoy sex with the right person. 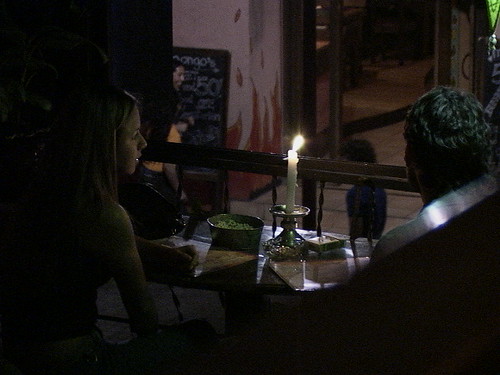 Back to the date ….Enjoyed a lovely dinner.  Clever, interesting fellow that loves to tease and try and get a rise out of me, which is generally not too hard.  So off to Taboo we go.  My first reaction – claustrophobic. Too many people.  Couldn’t see anything.  Could barely see my date.  He had the good sense to lead us further into the room, where the crowd thinned out and we could actually take in everything that was going on. 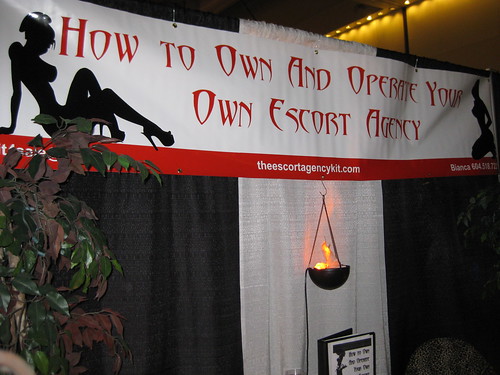 My impression?  It wasn’t even remotely sexy.  Total honesty, I found it to be rather trashy.  The shows were disappointing – the dancers I saw weren’t very good and had no sex appeal (at least not to me) and the workshop on orgasms was being led by a gal that seemed totally trashed and was reading off of cue cards.  Saw lots of skin, but it wasn’t sexy skin. There was nothing titillating about it.  It was just there for all the world to see.  And the gals sharing it didn’t seem to be sharing to tease, but rather as it was expected of them or to attract all the wrong sort of attention (displaying their insecurities, rather than that of so sexy confidence). More than anything, it seemed to be more about all the merchandise and sales and I’m not sure why anybody would pay $20 for the privileged just to shop (we were given our tickets for free).  Most of the items that I saw there could be easily found at several shops on Davie St and there you could browse for them without the crowds.  Most of the videos I saw were just plain crude.  I stopped to take a pic of one sign I found funny and the gal running the booth started to rub against me and suggest to my date a threesome (she definitely wasn’t my fantasy). The poor gal in the bondage demos had a seriously bruised ass and I question as to whether she’ll be able to sit for a week. Some woman handed me a pamphlet on getting a boob job, which I was more than a little disgusted by.  My boobs are just fine the way they are and I don’t find fake boobs to be at all sexy. So was Taboo sexy and worth the $20? In my opinion – absolutely not (Kittyn did go too however, so who knows she may disagree).

I did still have some highlights though, and there were several booths that could have been sexy or titillating in a different context. Also there were some vendors that were dressed in a very sexy fashion. 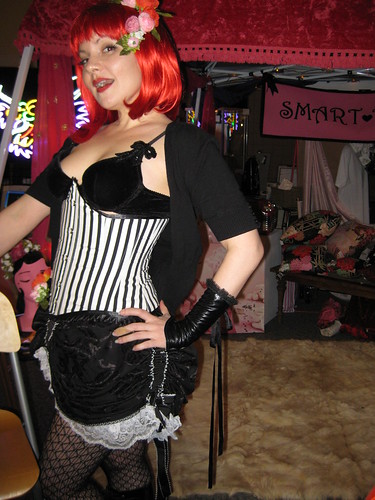 This gal from Smart Art was fun and had some cool stuff. 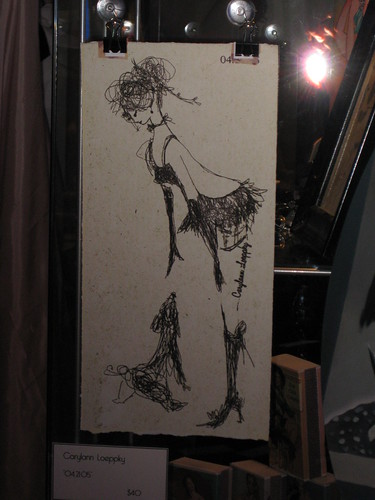