I have been present in many crowded events over my 21 years. New Year’s in NY 2009, New Year’s in Toronto 2010, when Peruvian President Fujimori resigned in 2000, to watch Britney Spears drink coffee in Boston, between others. Yet not once have I felt the energy I did last night while I was walking through the streets in downtown Vancouver. I had the brilliant idea of going to see the awards ceremony for Maelle Ricker at the huge screen on Robson square. 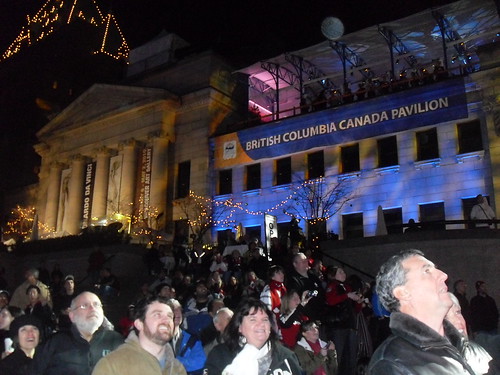 As I watched the crowd chant “Oh Canada” with huge smiles on their faces I felt a sense of false nationalism that has seemed to invade everyone here for the winter games. People dressed in black, yellow and red holding Germany’s flag were trying to follow the words, and everyone hugged each other as Ricker’s face zoomed in unto the screen. I have decided that every time Canada wins gold I’m going up to Robson Square and simply enjoy the happiness these people are having, as it is as real as it can get. An elderly woman came up to me as she saw I was taking a lot of photos and videos, and thinking I was still recording looked straight into my camera and yelled: “I love Canada!!”. I should have asked her to do it again but she just left yelling woos and yeahs towards the immense crowd. In total there were many chants for Canada and I participated in most of them, because even though I am not Canadian and know absolutely nothing about the rules of any winter sport (in particular Biathlon, I get lost every time I see it on the TV), I actually cheered on for Canada because I was proud to be on Canadian soil and surrounded by such great people. So from the bottom of my heart: Thank you for hosting the Olympics, they are amazing fun.

Now, of course my night didn’t end at 8. Afterwards we walked through Granville where we saw a man with an actual eagle head, a ton of jugglers although this one in particular impressed me with her skills, and my friends dragged me to Doolin’s “irish” bar where the tequila shots are cheaper than the Guinness and everyone was having a miserable time. Yet although my night was nothing short of fun (I ended up in Numero Uno Pizza being asked by a 70 year old woman what language Peru spoke and my whole life story leading up to UBC) my core memory of last night was of the following woman:

We were cheering Canada in the middle of the street when this woman dressed in something Bjork would wear came up chanting for Canada in a very thick accent. She looks younger in the picture above, but I thought she was 60. I asked her where she was from and she said Norway. When I asked her why she was cheering for Canada she said: “because I love Canada, and I am here, right?”. She took a picture and kept on walking, but I still remember her, not because of her weird clothing style, but because she was having fun by herself, minding no one’s business. She chanted on along with the drunk college boys, and was obviously having more fun than anyone on that block because she was doing it for her own sake. If you ever see her roaming the streets of this lovely city please tell her she has my respects. And she should have yours too.