Living in Vancouver, I am determined to make the most of the Olympic experience.  My first attempt failed as I was going to explore the venues with a girlfriend and her husband said she couldn’t go.  He pretended to be worried about her and all the crowds, but then admitted to just being jealous that he would have to stay at home.  I am so glad that my relationship is not like that!

Last night I did up the Olympics family style with tickets to Team Canada women’s hockey!  The kids started by colouring our windows (thanks to Crayola Window Writers), and progressed to their faces with left over Halloween make-up.  I was worried when I found out they were in front of the mirror doing this themselves, but they looked amazing and their spirit was contagious! My husband and I put a few Canada tattoos on our faces and got all decked up in red and white. 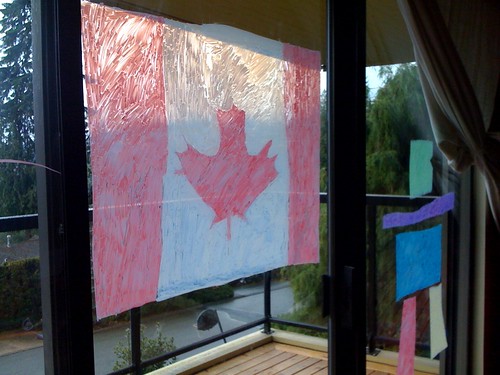 As we headed out on the sea bus we got a lot of looks, smiles and cheers. When we arrived at Canada Hockey Place, we blended in with the thousands of other people.  Even though we were such obedient spectators and arrived at our event two and a half hours early, we still had to endure a long security line up.  Once inside, we were rewarded for being early with freedom to walk right down to the ice and take photos.  We could walk around, explore and shop without big line ups.  I was really impressed that our kids realized the magnitude of their experience.  They kept everything, even snack receipts to “save for forever.” 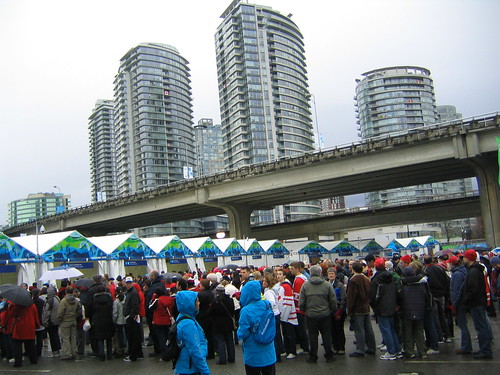 I was really moved by the energy of the crowd.  I was really looking forward to singing the National Anthem because I knew it would be the loudest most passionate rendition of my life, but to my dismay, the game started without it!  I was sad for a few minutes and had to get over myself so I could get into the game.  Wow, what a game it was!  Team Canada kept scoring and scoring and scoring!  Of course, I was impressed with stick handling, shots on goal and what not, but I was mainly caught up in the emotions of the whole night.  There are a few moments that I will never forget.  Every time the Slovakian team goalie would make a big save, the crowd of Canadians would applaud.  Only in Canada would we cheer for the other team.  They did a jumbotron interview with the 5 SVK fans in the whole building and the crowd went wild!  I have never been so proud to be Canadian. As the team Slovakia players left the ice, they raised their hands to clap for the crowd and we all stood up and gave them a huge send off-screaming, clanging our cowbells, waving our flags, and jumping up and down like they were our own.  I have to admit….I did shed a tear or two.

After the game we decided to explore downtown instead of going straight home.  We hit up the Live City Vancouver opening night and walked blocks and blocks to see the Olympic flame.  My conclusion to all of this?  A night out with the kids can be just as rewarding and fun as a night out with friends.  Actually, their amazement at everything probably made this an even better experience.