Moments of glory, speaking generally, are few and far between. One has to seize onto these moments when they come, and, if at all possible, immortalize them. Turn them into stories. Mind you, most moments can be turned into stories if one tries hard enough…whether they’re interesting can be judged by the opacity of the glaze over the audience’s eyes.

I have a story to tell – and it’s not just any story. It’s a story about a major moment of glory. The fact that I consider this a glorious moment is, I suppose, a testament to my eccentricity. My moment of glory could easily have been another, more balanced person’s moment of abject mortification. Also, as I can’t see any of you, myriad readers, I will have to trust that the glaze over your eyes isn’t sufficiently viscous to prevent you reading.

Firstly, I suppose it has to be established that I’m a bit creepy/fangirlstalkerish about certain musicians. These include The Weakerthans, The Decemberists, The Mountain Goats, Hey Rosetta!, and…Dan Mangan. I have been lucky enough to see every one of my mild (wild?) obsessions live, most recently The Mountain Goats just last night at The Rickshaw, a show which one of my friends described as the closest to a religious experience he’d ever been. In other words: I’ve been to some fantastic concerts. None of them, however, can quite match Dan Mangan’s show at The Vogue in Vancouver BC, on May 8th 2010.

It was the third time I’d seen Dan live, the first having been at the Vancouver Folk Music Festival in the summer of 2009, where, after chancing upon him performing with a group of other musicians, I made sure to be there every time he was playing, the whole weekend. I then bought his first album and EP, waited with baited breath for his second album, and have lived and breathed Nice, Nice, Very Nice ever since. Needless to say, I was a little bit excited about Dan’s sold-out show at The Vogue. My group of Dan-loving friends that managed to get tickets got there early, and we set up camp in the third row. From the first note of “Sold,” we were absolutely enraptured.

Being the slightly-creepy-fangirl-stalker that I am, I had read some reviews of Dan’s other shows from his nation-wide tour. Many of them mentioned a magical moment during “The Indie Queens Are Waiting,” which is a duet between Dan and the fantastic Veda Hille, when, in the absence of a female vocalist on the stage, the girls in the audience took up Veda’s part. This being a hometown show for Dan, combined with the obvious rapt attention of the audience, led me to believe that the same magical moment would organically occur when Dan played “Indie Queens” at The Vogue. However, and this was an interesting, perhaps even revelatory moment for me – moments have to start somewhere, or in this case, with someone.

The moment of truth arrived: Dan’s wonderful ten-piece(!) band left the stage, leaving him alone with all 1150 audience members. He began playing the quietly mournful “The Indie Queens Are Waiting,” and, the first time that Veda Hille would have sung alone, there was a conspicuous, and total, silence. I swear Dan looked a little surprised, and, with a wry smile, he said, “I couldn’t find Veda Hille, to sing those parts. I don’t know where she went.” Honestly, what’s a girl to do? The next time Veda’s part came around, I was sure that everyone would sing along. So, right on cue, I belted out, “Are we cool now?”

And I was LOUD.

Dan looked over, straight at the area that I was sitting, and, despite my heart beating about seventeen times its normal rate, I kept singing. This was one of those marvelous moments that teeter on the edge of complete humiliation and endless glory. The girls in the section around me joined in on the “aaaaahhs,” and Dan said, “Perfect pitch!” and “I don’t even need a band!” Each time the group of us sang the next bit of Hille’s part, the rest of the audience laughed, but I swear it was a joyful (not mocking!) laughter. (Really. Someone filmed this and it’s on Youtube, so I’ve had time to assess it whilst my heart is beating closer to a healthy pace.)

One of the many reasons that I think the show was so fantastic was the aura of love and support that simply radiated from the audience toward Dan. When they laughed along with us Indie Queens that knew every note of Veda Hille’s harmonies, I knew I wasn’t alone in being proud that Dan is a Vancouverite, and a humble, charming, incredibly talented one at that. The entire concert was a moment of affirmation that I came close to finding in the Olympics, but never truly did until Dan Mangan took the stage, smiled, and began to sing. By the time he played “Robots,” the entire plaid-clad audience was on its feet, singing along, buoyed by the joy of being in a crowd that, for once, wanted only to sing “Robots need love too!” and bask in an atmosphere of what I can only call complicit, reciprocal…well, love. 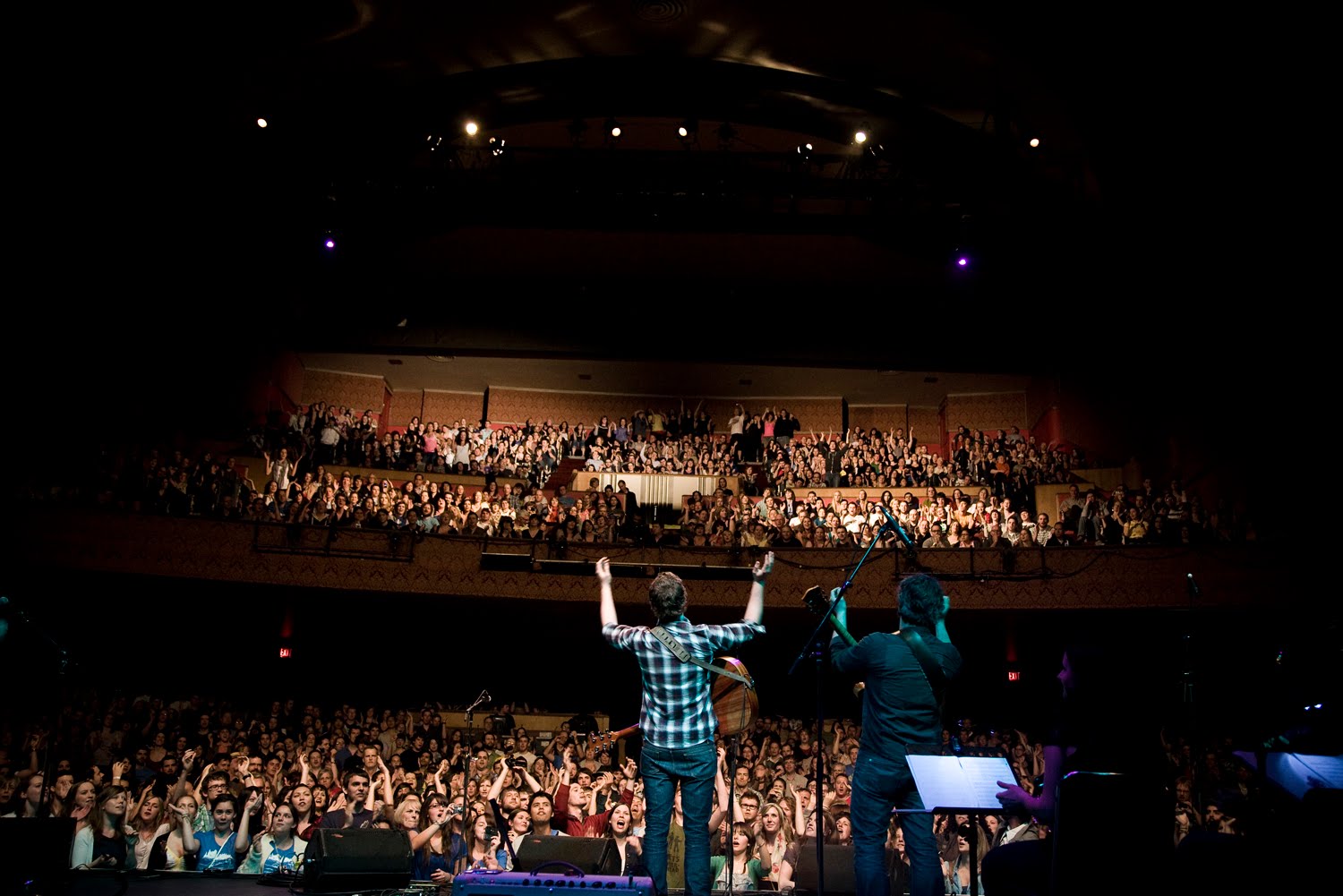